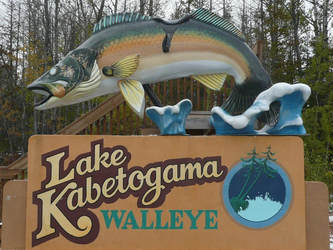 ​Kab’s giant walleye is early work of acclaimed American artist Bryers
By FAYE WHITBECK, Staff Writer;  The Journal, Int'l Falls, MN
Kabetogama’s giant walleye statue wasn’t designed by a handful of prefabricators from one of those specialty companies which produce and plant city mascots around the country. A quick Googling of its creator, Duane Bryers, shows him as one of America’s most gifted and versatile artists. Since it was erected more than 60 years ago, Kabetogama’s colossal walleye has invited thousands of tourists, anglers and summer residents to climb aboard for a photo opportunity. The 14-foot fish is equipped with a saddle, boastfully implying the size of Kabetogama Lake’s walleye. Bryers’ design was executed in concrete and steel at an approximate cost of $2,500.

Minnesota can claim a few of the now 99-year-old Bryers’ amazing years. The artisan, who would come to fame for his Western paintings and his 1950-60s calendar drawings of the ample-figured “Hilda,” was born in 1911 in Michigan’s Upper Peninsula. His family moved to Virginia, Minn., when Bryers was 12 and already obsessive about sketching.

Pat Hamalainen, International Falls long-time resident and Virginia, Minn., native, told The Journal that her Italian immigrant dad, Louie Colbassani and Bryers were boyhood friends on the Iron Range. The Colbassanis would eventually own Deerhorn Resort in Kabetogama where Hamalainen’s dad was a member of the community’s resort association, she said, which is how Bryers came to be the designer of the giant fish.

In 1936, 25-year-old Bryers had a scheme to overwhelm the world with a mural he would paint for the Minnesota school board to help him finance an art career in New York City. The MSB gave him permission to do the mural which was 103-feet long and 10-feet high. The massive work, a depiction of the Iron Range mining industry, is now a historical treasure under glass in the corridor of Virginia’s Roosevelt High School.

Bryers also won national attention for his towering ice sculptures of the heads of Washington, Lincoln, Will Rogers, and aviator Amelia Earhart which drew crowds outside of Virginia’s Roosevelt High School in the 1930s.

As expected, the Iron Range mining mural paid for Bryers move and living expenses in New York where he studied at the Art Students League. Winning a war poster contest put him in “Life” magazine and New York newspapers before he served in the U.S. Air Force from 1943-1946. In the service, Bryers fulfilled a childhood dream and created a nationally syndicated military comic strip called "Corky."

Bryers’ “Hilda” was introduced into the Brown & Bigelow calendar line in 1958. In the recesses of many middle-aged minds are memories of the plump and pretty zaftig, “Hilda,” featured on the pinup calendars which hung in an uncle’s or grandfather’s garage of yesteryear.

Bryers launched a career as a Western artist in his 50s when he was commissioned in 1968 to paint the mural “Gun Fight at the O.K. Coral.” He has been featured numerous times at the National Cowboy Hall of Fame, the Remington Museum and The Rockwell Collection.

While most artists reach their peaks at age 55, the respected and well-employed commercial artist is still going, known for his amiability and grace, he recently told a reporter that he was now doing some of his best work.

Bryers has settled in Tucson, Ariz. In 2009, he donated several of his prints to the Virginia Area Historical Society Heritage Museum.